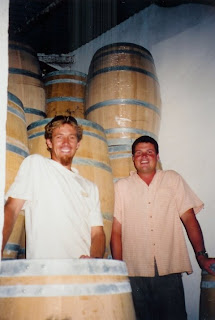 October 2004 – 28 years of age – final year B.Sc. Agric Viticulture and Winemaking – Stellenbosch. After serious negotiating, I convinced my lecturers to allow me to rather work for myself by making wine for a client, than doing the customary winemaking practical, the university required. Problem was (and still is, some would argue!) that I had no wine farm, cellar or finances!

Of course I made a plan…. but in order to explain how I financed a fully functional winery, I have to take you back to Financial Opportunity 1: June 2004. At that stage KANU wine farm was selling an unbelievably good unlabeled Shiraz at R12.50 a bottle. I scraped together all the money I could, and bought 36 bottles. I still remember being convinced then that I was financially ruined! But I managed to sell the wine to friends for almost double the purchase amount. I then went back to KANU and bought 6 cases, sold them and the word spread like wild fire. In 6 weeks I managed to sell 4500 bottles. It was an opportunistic venture and KANU sold out. Finally, after settling my University fees and buying my newly wed wife a dishwasher for her birthday, I was left with R13 000.

Not long after this episode, a friend of mine told me of a guy in Paarl who was stuck with a warehouse filled with wine barrels which he had to get rid of in less than 2 months. When I went to have a look, I saw only old used wine barrels which wouldn’t have been of any use to me. Just before leaving, however, the guy told me that he did have some unused barrels in the back, but that it was old. And there it was: Financial Opportunity 2! 44, 3-year old unused wine barrels, still wrapped in plastic. I bought one, because I could only fit in one on my back seat of my 1981 Mazda 323 hatchback car. I had it analyzed by my lectures at the University and they found no harmful bacteria. With not much convincing I managed to get my best friend Francois Hanekom to help me with his bakkie and trailer, and went back for the rest. The owner had a fixed price of R300 per barrel for all, but after counting my money I could only pay him R200 a barrel. He agreed and we had a deal. That night we stacked Franscois’ single garage to the brim with wine barrels. When there was no more space, I took the rest to my house. Just try to imagine it: wine barrels in the living room, braai room, garage – basically in every possible space I could find. In the months to come I managed to sell them one at a time…. R3500 to R4500 per barrel, depending on the size. Again I paid some debt and kept a few barrels for my own personal use. I made good profit but was still short in putting up a winery.

Back to Oct 2004, final year: I started a venture called Personal Winemaking where I offer my services to individuals who want their own personal wine made. I secured my first client who wanted his own Sauvignon blanc. But more importantly, I secured his DEPOSIT without showing him the winery,…as I had no winery to show him!

Join me next month where I’ll be telling you how I then managed to set up a fully functional winery in one week!